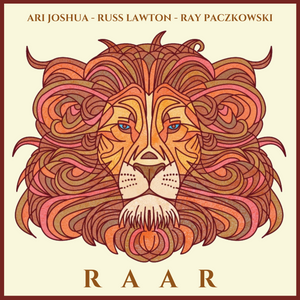 A new six-song EP, RAAR by guitarist Ari Joshua, featuring Ray Paczkowski and Russ Lawton from Soule Monde and the Trey Anastasio Band is coming out November 16th. More gorgeous original psychedelic rock-jazz fusion tracks from the February 2021 recording sessions in Burlington, Vermont can be anticipated for intermittent release in the coming months, and a vinyl album is anticipated in 2022.
(links to music posted below for review)

In the Winter of 2020-21, in the middle of the pandemic, Ari Joshua flew into the snowy city of Burlington, Vermont to collaborate with drummer Russ Lawton, organist Ray Paczkowski, and long-time Phish Vermont recording engineer Ben Collette. The excitement sparked an intense and healthy writing spree. Ari composed about 25 demos in all.

“As I climbed into an airplane with my two favorite guitars, and a checked suitcase full of audio toys, I knew it was gonna be a great adventure to travel to Burlington and track with these guys, but I had no way of knowing the level of magic and flow that would unfold.” (Ari)

Ari had already composed vocal tracks “Rae of Light” for his 90-year old grandmother Rae’s birthday, and “Gran-mama” for his deceased grandmother Granny Queenie. It was a treasured experience to record these two sentimental tracks at The Tank in Burlington with such wonderful musicians. [edit] Incidentally Granny Rae passed away this week and was able to hear the track and it brought her alot of joy and helped her to transition to her next phase.

The trio managed to record versions of all 25 demos; mostly brand-new compositions and concepts. “Star Lord” was originally named “Country Hoppin,” written while Ari was flying from the West Coast to the East Coast. He wrote “For Ray” for Ray Paczkowski to shine a light on his unique approach on the organ. “The Bernie Meme” was inspired by the viral photograph of Vermont Senator Bernie Sanders in his hand-crafted mittens during President Biden’s inauguration, which happened in conjunction with the dates in Burlington, Vermont. The creative vibrations of life rippled through musical hearts and hands in a Northeastern snow-covered studio. ‘Audio Bicycle Day’ pays tribute to the recording studio The Tank, which enhabits an old bicycle factory, and still has old gears, bike parts, and memorable decorations up around the property.

Grammy nominations; ‘Father Time’ a single from this band already released as well as 3 other Ari Joshua songs are on the ballot for Grammy nomination this year, also including ‘Eye’s Only’ feat Robert Glasper & KJ Sawka, and ‘Sat Watcha Wanna Say’ feat Delvon Lamarr & Skerik!

To support the release, The Ray, Ari and Russ (R.A.a.R) Trio just played two intimate late-night throw-downs on October 30th and 31st after Phish’s sets at MGM Grand Garden Arena in Las Vegas. The shows at Notoriety Lounge on Fremont Street were the Trio’s first performance since recording during the pandemic in Burlington.  The ensemble has a list of over 30 original songs to pull from (some of Ray ‘n’ Russ’ and some of Ari’s) covering all genres but rooted in the same solid groove fans of Soule Monde and TAB know well.  The three singles from the project “Father Time,” “Rae of Light” and “Star Lord” are already available in all digital stores.

Attendees got to dance all night long. Ray on his usual analog heavy organ, clavinet, and Wurlitzer set up, Ari, an innovative singer-songwriter trained in jazz and ready to go in any direction, had a tasty set up of spooky soulful tones, and Russ held down the groove like a creative machine. Entrance to Notoriety Lounge (www.notorietylive.com) boasted a balcony view of the rotunda a hundred yards away from the lights of the Fremont Street strip was beautiful and it felt rather exclusive.  Getting out of the MGM Grand maze is a challenge for anyone, and the journey to Notoriety through hundreds of thousands of glittering lights and the costumed crowds was a distracting obstacle course, so the terrific turn-out was amazing! Ray, Ari and Russ performed three killer sets of dance-friendly songs from both Soule Monde's albums and Ari's compositions including previously released 'Father Time' and songs from the soon to be released 'RAaR' six-song EP.

It was a great place to see these players in a raw trio format.  Most everyone came in costume, Ray, Russ and Ari were accessible to talk with, and the party was hopping until around 4am.  Attributing the magic of Vegas, many ‘phans’ again powered through the night to come see RAaR.  Many of the attendees had also come to the Saturday show and reported having had such a great time they had to come back for night two!

The audio files for the Vegas shows will be made available soon, at www.arijoshua.com and RAaR will most likely perform together again in 2022.

Ari began releasing songs from his Vault earlier this year, including original recordings with artists such as Robert Glasper, KJ Sawka and Delvon Lamarr from the Delvon Lamarr Organ Trio; more to come from the Vault in coming months!

The pandemic allowed for Ari to shift his focus closer to where his heart is, which is to travel and spread expressions of love and joy through psychedelic jazz and rock. He’s most excited to share his work with the beloved passionate listeners of the jazz, and jam band music scenes where improvisation and compositional music is most appreciated.

For those unfamiliar, Ari is a Cape Town, South African born – American raised guitarist. After attending The New School in NYC. He is the founder and owner of The Music Factory, an online music lessons portal, and Seattle’s in person music school. The Music Factory is now almost 15 years running, employing close to 100 musicians since its inception. Music Factory teachers have taught over 40,000 lessons to students of all ages, and skill levels.

Visit www.arijoshua.com for video clips of past shows, the recent releases already out, merch, updates, and the soon to come RAAR EP out November 16th on all digital stores and streaming platforms. .

“With the pandemic in full swing I owe a great thank you to Trey Anastasio for opening the doors to a protocol to collaborate during his Beacon Theater run and for sharing these great players with the world.”

“The eclectic multi diverse styles I write in work best with folks that can play or understand the jazz language but also can also serve the music with a knowledge of Rock, and African music. As odd as it sounds, even in the best of times, it’s hard to find the right people to work with in this style.  Ray and Russ were able to interpret my music creatively and intuitively from the first or second take, it was a real joy to watch things unfold, they also where all about getting to business, I really felt as though I was with really like minded souls. From the first note of recording I could sense that Ray and Russ were a perfect musical fit, there was a shared respect and love for the music you don’t always find out there.”

“The songs are ordered  in a palindrome, the EP title R.A.a.R (which stands for Ray, Ari, and Russ) is a palindrome. The lion art work is by Brian Steely, so RAAR is also like a lion’s Roar, my name also means lion, so there are little easter eggs in there. The order is a grandmother sandwich, the tribute songs on the ends, next in are two songs with the pure instrumental flavors, just the trio standing on it’s own, and the middle slots are both mix of the two worlds, some light vocal layers, with the organic instrumental stripped down trio featured throughout.”