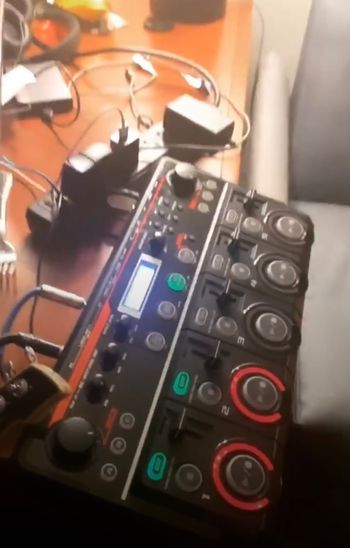 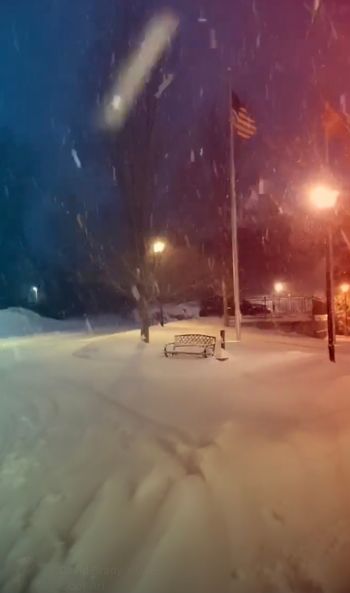 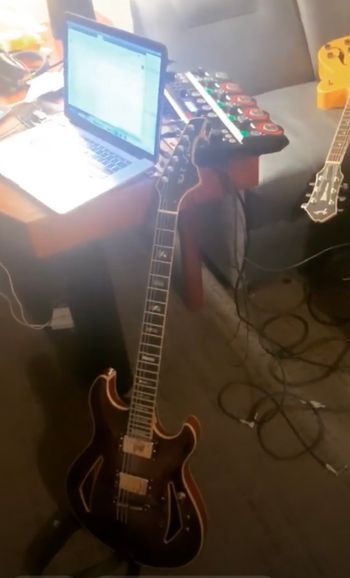 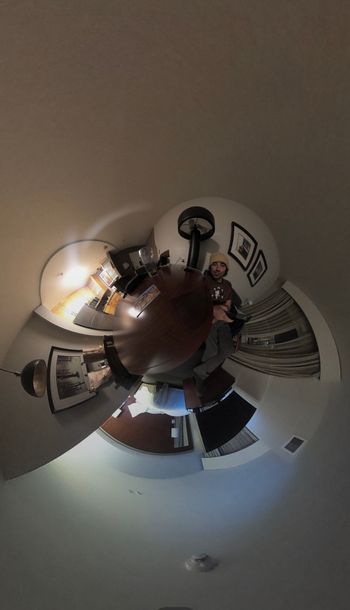 Travel Restrictions for Vermont in January included a required 7 day quarantine.  He spent the time in a Burlington hotel.

He found opportunities to enjoy the snowy Vermont landscape, practice his guitar WHILE walking on the treadmill, learning how to use his new 360 degree camera, and making charts for the 40 songs he composed for the trip.

An invitation to collaborate with some beautiful musicians is in motion pending a c19 test. More news here as there is not much to do in a room by ones self... other then sleep, watch tv, and shower too often.
- Ari 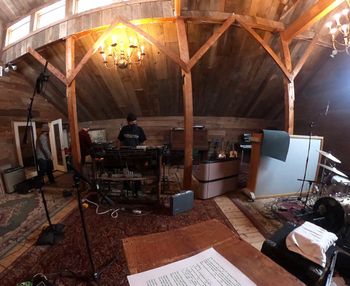 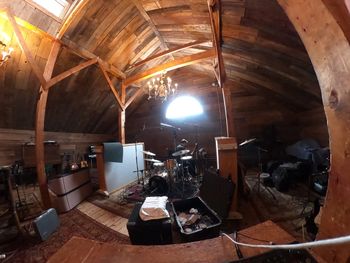 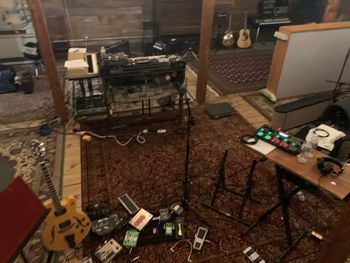 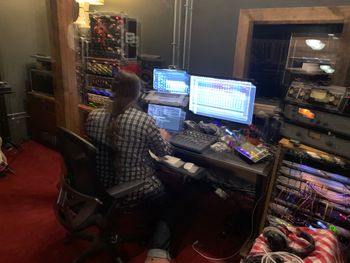 Nothing like an 8 hour flight and 7 days in a hotel room to wind one up for a studio!  When I arrived, I was welcomed with enthusiasm; both Russ and Ray were already set up and ready to go.  I feel completely natural and at home so far over here. Looking forward to a week of new material! Almost so excited I may have forgotten to sleep...

One Day and so far and its been wonderful. Engineer Ben Collette, Ray Pazcowski - Organ/Clav, Russ Lawton - Drums - I feel completely natural and at home so far over here. Looking forward to a week of new material! Almost too at home, so excited I may have forgotten to sleep... 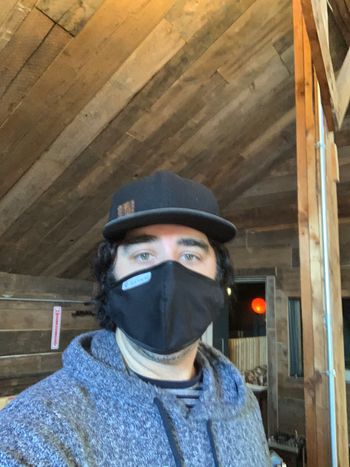 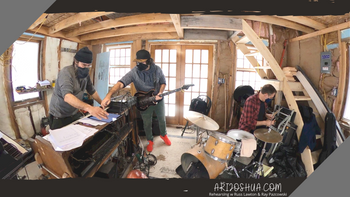 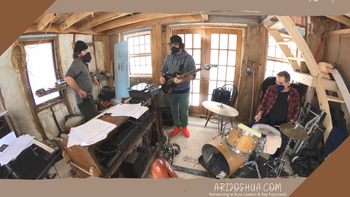 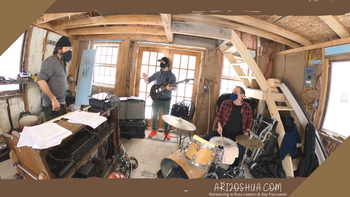 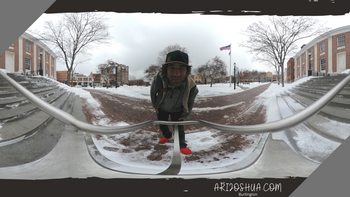 Feb 6 Listening back w Ben Collette Shout outs to Ray & Russ (who are great people / Keys n Drums from SoMo, Trey Anastasio Band, and Vermont locals) Burlington is great! Quarantine isn’t so bad when there’s music at the end of the funnel! If your new here please like and follow us all for more!

Feb 8 Ari is in Burlington, VT working w engineer Ben Collette, Drummer Russ Lawton, Organist Ray Pazcowski of Soul Monde he is sending me updates and we will share them here throughout the trip.

He says: It’s been wonderful! Look forward to sharing some new music with ya!

Feb 10 Rehearsal up in the snowy mountains of Vermont, aside from reviewing new material to record... Today, we learned about the ‘Vermont Rock’ a technique used to get mini vans out of the snow. It involves rocking the van whilst a skilled driver (not me, in this case - Russ) applies the right amount of pressure & wheel turning while two people push the car forward. As the vehicle gets pushed back, it rocks back forward due to the pressure on the ice and snow. After gaining inertia, on say the 4th rock, the driver then takes over in collaboration with an additional ‘BIG PUSH’ by the pusher people which gains yardage towards the communal goal. In serious situations such as the one experienced, it may take several reiterations of the technique to free the van back into its natural habitat (the open road).

Feb 12 ICE CREAM lovers. Does anyone really eat less then at least 3/4th a pint if the whole pint is available?

I mean I take the lid of a Ben n Jerry’s and I’m considering it a meal. I can’t stop till it’s gone.

The last spoon has to be enough, I can rationalize it more and more as the bottom of the tub emerges. It has to be the right amount to eat, since I try not to buy 2 pints of any one flavor per shop.

Picture from the town square, the plan was to come home, but I’m staying. Well, at least a few more days. Working w the folks here has been even better then anticipated. #Ben Collette #Russ Lawton #Ray Pazcowski have lured me in w chemistry & a mutual purpose, making trax. Once again Organ Trio music has captured my Soule... A little more work & a little Les’s quarentine... Work now, play later? #echothedream 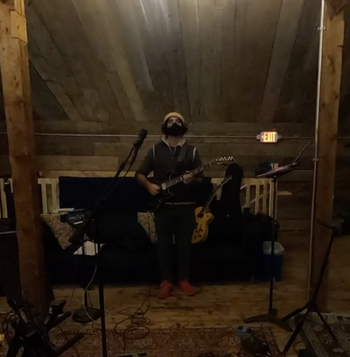 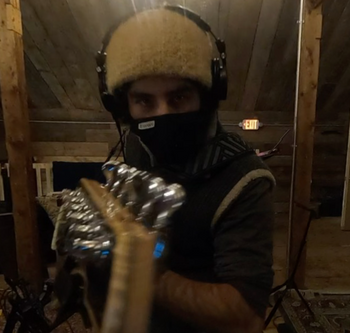 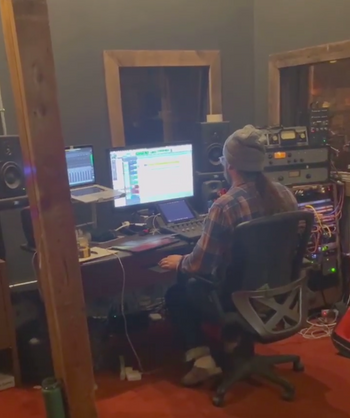 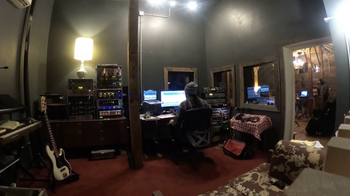 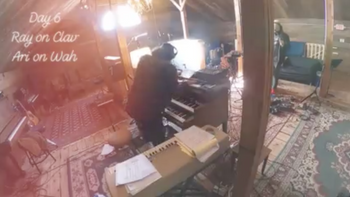 Feb 13 Overdubbing and finally looking at some pics, looking forward to sharing this joy with everyone. come inside/treasure hunting its a 360 photo you have to scroll around R/L and tilt. Ray Pazcowski of Trey Anastasio Band and Soule Monde just ripping all day, and Ben telling me stories of working on Phish’s last 4 albums learning a lot. Lots of pics to share when it’s over.
: Studio Overdubing : total bliss! Lots to share! Loving it!  Learning new tricks, listening to stories of wow the SoMo/PH crew make albums while Patchcow’ (the keyboard players nickname) tickles the keys on songs laid down just a week ago. First time I been able to survey the footage - a picture of Bliss.

Feb 14  Rob O’dea is engineering today. Don’t wanna leave!  Been just the best two weeks. Ray is making me smile from the inside out with his collaborative abilities and ability to get inside of my head and creative ideas. Burlington, VT you where good to me.

It’s been a wonderful trip, over 2 weeks in Vermont, lots of rest, lots of prep time, and solid work in the studio. Thanks to Ben Collette and Rob O’dea for the hospitable and safe studio experience, and to

as well, the results will speak for themselves, but I’ll share that it was great chemistry from the first note to the last overdub. The fact that it felt so good the whole time, that is something. We managed to track forms for an astounding 27 songs. I prepared some 35-40 song ideas before traveling, mostly by sharing ideas over the few weeks leading up, and during the quarantine period. Most started simple loop ideas recorded on a loop device at in my office at The Music Factory, I recorded videos of on the phone of the loops and shared them. The folks at the Residence in made quarantine very easy by organizing meals, and letting me into the gym which was initially closed late at night. I’m actually not sure this would have happened at all or been the same if not for the state of things w Covid, down time is the norm, and with the ability to leave everything set up and add days, and the ability travel affordable without a guaranteed return date helped so much. I am looking forward to more collaborations on this level.

I spent some time on days off walking around outside, and getting to know the town. I spent a few days in Burlington after graduating college during some music travels, but that was along ways ago. It’s a small town, no skyscrapers, or big office buildings, its sprawling, so it does have the feel of neighborhoods and areas of other towns.

One of my favorite things was going to rehearse in the woods, and to do a day drive off the grid in east coast snow. I remember this cold and snow, it’s for real, but they take care of the roads very well, and it just works.

Spending so many years in the NW, of all the places on the east, this feels most like home. After leaving my stuff set up at the studio for 10 days and creating w some folks that are on the same page, it was bittersweet to leave, I’d be happy if it just kept going! Still some work to do before this stuff is ready to share, but there are a few more items on the stove, some even in the fridge so to speak, so I’ll be announcing and releasing some other exciting music before this is ready. Meanwhile, ready to take some time to rest up, and get back to it.

Here’s a snap of Ben & Ray two days ago. Cheers!